“The Oscar statuette is a gilded white man holding a sword – basically, a phallus holding a phallus”, Bidisha claimed at the guardian.com, January 15th. “He gets an extra special polish this year because every nominated best director, screenwriter, screenplay adaptor and original score composer is a white man.” #OscarNoms No female directors, screenwriters, or cinematographers. No actors of color. #diversity

How come? I will try to explain some of the reasons for capitalist patriarchy and its lack of diversity by referring to the work of Richard Dyer. Mass media is an acknowledged key institution for the transmission of culture, as it plays an important role in determining what kinds of discourses are disseminated in the public sphere. When we are complaining about diversity in media, we have to keep in mind that being white is still seen as normal. White is not even a colour; it looks absent, empty, neutral. It is a norm, to which deviance is measured. Have you ever seen a movie about whiteness? Films are never ‘about’ whiteness. Media play a major force for transmitting culture and stereotypes, through perception, interpretation and reproduction. Although media has the potential to spread a variety of messages about any topic, there remains one problem: Producers are socialised into the same prejudices they produce. Is it really true that media do no more than draw upon pre-existing constructions within society? Producers of media content may consciously or unconsciously use these readymade images to transmit a desired image or message to their audiences. If minorities are represented, generalisation to all members of a group on the basis of their ethnic identity happens quite often. Stereotypes represent values and assumptions of the concerned social group or individual of a group and focus on similarities between members, rather than about the differences.

The point which Alexandra doesn’t get is that representation is always linked to power and shaped by those who are in a dominant position. Same counts for nominations. It tells us a lot about how power relations are organized. For example stereotyped groups have not been defined as such by themselves, but by those who hold dominant forms of social power. Stereotypes become ‘common’ sense through repetition, because it reinforces and keeps up those ideas about people.

White people have power and believe that they think, feel and act like for all people; white people, unable to see their particularity, cannot take account of other people’s; white people create the dominant images of the world and don’t quite see that they thus construct the world in their own image, white people set standards of humanity by which they are bound to success and others bound to fail. Richard Dyer

If we are analysing representation of ethnicity in mass media, some things remain significantly.

Although many mass media content producers seem to be aware of racism, they accommodate racial thinking, even if they reject it. “All the nominated best actors and best supporting actors are white men. All but one of the best picture nominations are about how hard it is being an entitled, genius white man.” This process is evident in casting decisions wherein producers selection accommodate the racial thinking of the market. This is, sadly, even publicly supported, as there is more revenue for ‘white’ film. “Then it takes the profits and hands them out among white men, knowing that an Oscar nod will lead to a glorious spike – an erection, if you will – in white men’s careers.” A circle begins.

White people need to learn themselves as white, to see their particularity. In other word, whiteness needs to be made strange. Richard Dyer

There have been a lot of improvements through campaigning in the last years, but the existence of the white privilege in media production is still evitable. The Oscars is the latest event of prove. The following youtube clip shows how black actors are forced into playing victims, rapists or entertainers, including funny dance moves. “Victims and villains: that’s what we get? That is, when we get anything, when we’re visible at all. Is that what Hollywood thinks we are: capable of playing raped and beaten slaves, people in pain who deserve pity. But it doesn’t think we’re capable of writing, directing, editing, scoring or producing films?”

Dyer, R. (1977): White. London: Routledge
Bidisha: The Oscars celebrates white men. What about the rest of us? 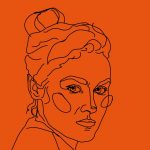